Glen Theatre may remain closed – but it will be back

“WHATEVER IT TAKES, WE WILL FIND A WAY THROUGH THIS AND WE WILL OPEN OUR DOORS AGAIN”

‘IT has been a struggle, there is no denying that…but we will find a way through this’.

Those were the defiant works of Glen Theatre chairman Rory O’Driscoll, who promised the Banteer venue will find a way to remain an integral part of the local community long after the Coronavirus epidemic has gone away.

Like many other venues around Cork, the volunteer-run theatre has been severely impacted by the COVID-19 restrictions, which left management with no option but to cancel its spring and summer calendar of events.

“In fact we had taken the decision to close the theatre days before the restrictions were imposed back on March 12. We felt that it was the most prudent step to take, given that many of our regular patrons would fall into the older, more vulnerable category,” said Rory.

The doors to the intimate venue, which over the years has hosted some of Ireland’s top names including the late Brendan Grace, Eleanor Shanley and Sean Keane, to name just a few, have remained firmly closed ever since.

Rory said the closure has had a devastating impact on the theatre’s finances, with estimated losses from ticket sales and other funding streams such as community meetings running to at least €10,000.

He said, in the event of the theatre’s autumn and spring 2021 schedule being mothballed, that figure could very easily run beyond the €20,000 mark.

“That scale of loss is incredibly difficult for a small, community-run theatre such as the Glen to sustain. We have overheads such as rates, the bar licence, and lighting and heating to cover, so it has been a struggle, there is no point in denying that,” said Rory.

“The most difficult thing for us, as things stand, is that we are unable to plan ahead and book acts as we have been getting no proper guidelines. The truth of the matter is that we have been left hanging by the Government. We are not alone in this, the future of many small venues all around the country is in jeopardy because of this lack of clarity and the lack of financial supports available to them,” he feels.

While Rory admitted that the longer the restrictions remain in place, the more difficult it will be to find the funding to finally reopen the theatre, he and his fellow committee members were determined to ensure that the Glen Theatre was not allowed to become a footnote in Banteer’s history.

In fact, the local drama group based at the theatre are currently rehearsing for their next production, ‘The Cause’, a play about the War of Independence, written by local man John Deady, which they hope to stage once the theatre reopens – whenever that might be.

“I think that tells you all you need to know about how determined we all are to see the theatre reopen once a vaccine is found and we are able to return to some sort of normality,” said Rory.

“This is a vitally important facility for Banteer. Not just from an entertainment point of view, but also from a social perspective. For many years the theatre has been at the hub of community life in Banteer, and we will do everything within our power to ensure it remains that way. Whatever it takes, we will find a way through this, and we will open our doors again,” he pledged. 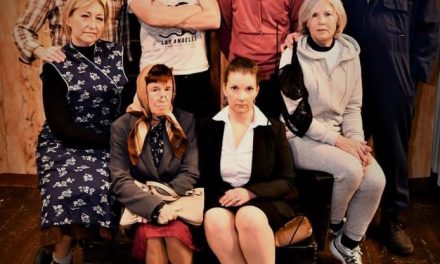